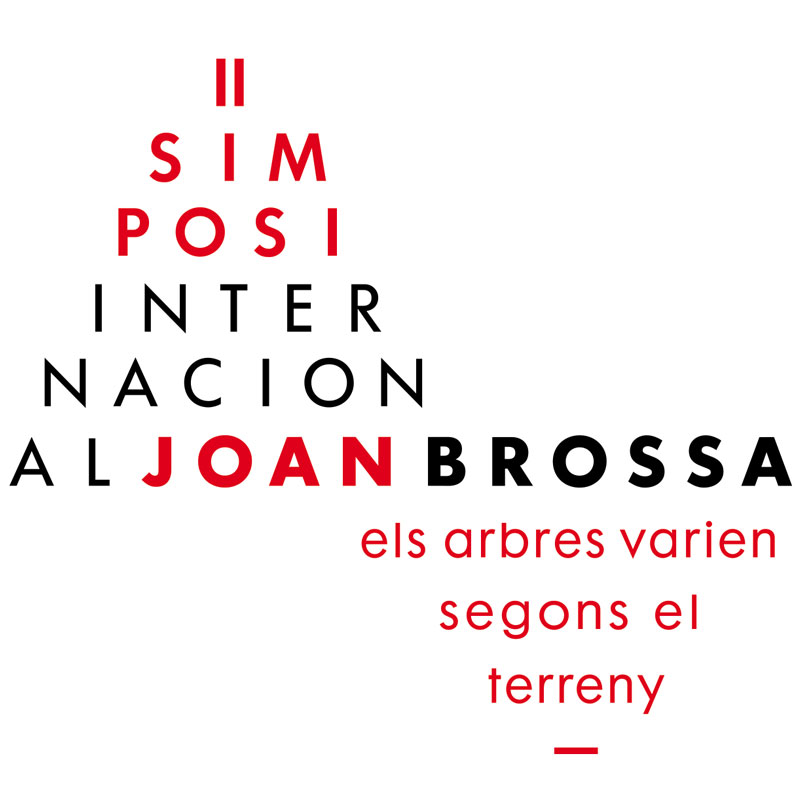 The research group Poció, Poesia i Educació (Project Ref FFI2016-75844-P «Arts and poetics: creation, archive and education») supported by Institució de les Lletres Catalanes and Fundació Joan Brossa, organizes the II International Symposium Joan Brossa: Trees vary depending on the terrain, which will be held at the Institut d’Estudis Catalans, Fundació Joan Brossa and Escenari Joan Brossa on November 7 and 8, 2019.

On the occasion of the poet Joan Brossa‘s birth centenary, twenty years after his death (1998) and eighteen years after the only academic symposium (2001) held so far about his work, it is paramount to carry out a revision of the research into his creation and new readings from a new century and cultural context. While the first Symposium was a gathering of researchers who had met Brossa and approached his work from various disciplines, the second Symposium will involve those who never met him, but have read all the published work from the participants of the first Symposium.

The first meeting was the consequence of the first Brossa’s anthological exhibit after his dead entitled “Joan Brossa or the poetic revolt” at the Fundació Joan Miró. On this occasion, the II Symposium will take place two years after another important exhibit, i.e., “Brossa Poetry” at the Museu d’Art Contemporani de Barcelona (MACBA). The latter exhibit was the result of cataloguing Brossa’s work, a task started by the Fundació Joan Brossa and continued by the MACBA’s Archive since 2011. Both exhibits had different aims, showing almost two opposite points of view.

Whereas the I Symposium had a traditional format consisting of talks and papers on tart, literature and theatre; this II Symposium breaks that traditional division and outlines new
approaches to his work from a more transversal point of view, addressing the themes of word, image and action.
Thus, the main goal is to gain new insights into the studies about Joan Brossa. This international meeting will discuss the following three main areas:

The reflection process can start with a poem from Em va fer Joan Brossa, a book from 1950, resulting from his conversations with the Brazilian poet Cabral de Melo. Parallel to the differences we find in the format and meanings of this book as compared to Brossa’s previous books, trees – and people, literature and art, for that matter – may vary depending on the terrain. But, despite this, what matters ultimately is the human essence. Researchers of Brossa have changed and so have the readings of his work. This Symposium aims at empowering new voices and exploring new approaches to Brossa, a poet whose work seems to be more up-to-date than ever.

(1) Poció. Poesia i Educació. Research Group recognized and funded by the Generalitat de Catalunya 2017 SGR 1668, focuses its work on the popularization of contemporary poetry (www.viulapoesia.com), in the search around archives of Catalan experimental poetry, and the use of poetry in the classroom (www.pocio.cat).

16:00 Round table «New readings on Joan Brossa: how it has been read and how it is read nowadays»: Marc Audí, Héctor Mellinas and Ronald Polito
Moderator: Joan M. Minguet

20:00 Performance «This Line Is The Present», by Emily Mast and ERAM students (from Pg del Born – c/Flassaders to Museu Picasso)

The II International Symposium Joan Brossa: «trees vary depending on the terrain» will take place on November 7 and 8, 2019 at the Institut d’Estudis Catalans (Carrer del Carme, 47 – 08001 Barcelona).

«This Line Is The Present» at Museu Picasso (Carrer Montcada, 15-23 – Barcelona)